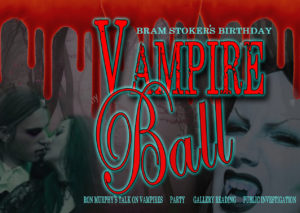 The Season of Vampires! And….What goes “Bump in the Night”!

Vampires, Real or Fiction? So many of us ask these questions during this time of the year when everything that goes “bump in the night” and has us on edge! Is this a creature or some sort of a blood-sucking human with a gruesome need or sick fetish?

With the publishing of Bram Stoker’s novel “Dracula” in 1897 the world became obsessed with the thought of this ghoul of the night, stalking it’s pray, and draining the blood of their victims.  During this time of the year, do you turn around in the night to see if one of these creatures may be following you?  Does the full moon give you pause to question whether these beings actually exist?

History tells us that Bram Stoker came up with the name Count Dracula after the Transylvanian Nobleman Vlad the Impaler who lived during the Ottoman Empire and ruled from 1456-1462.  He got is name from his desire to impale his enemies by wooden stake.  While his victims were dying on the stake it has been said he would dip his bread into their blood and often would drive a stake into their heart to kill them.  Enough to keep anyone up all night thinking about what might be coming for them in the dark!

The superstition around Vampires was on the lips of many during the Middle Ages when those who practiced this unusual practice would be linked to the plague. Some people who had developed a blood disorder, porphyria, which rendered the individual with severe blisters on their skin lead people to this unusual act of drinking small amounts of blood.   This would often lead others to believe they were linked to vampires!  In some cases, this temporary relieve from these blisters, from being in sunlight, came from drinking blood and staying out of the light.  This would add to the Vampire persona.

In the late 1800s when tuberculosis was moving thru communities taking the lives of so many Mercy Broom in Rhode Island was accused of being a Vampire.  After dying of tuberculosis and being buried in an above ground vault, the area experienced an excessively cold winter and the town exhumed their body to find very little decay and further pushed the notion of Mercy being a Vampire.

Today the fascination continues with Vampires with many books and movies on the subject.  There are groups that call themselves Vampires.  Some actually drink small portions of real blood while others claim to suck the energy from their victims.  During this time of full moons in the night sky, a crisp bite in the air, and leaves crunching below our feet, it makes one wonder what lies in wait in the dark and is looking for pray to feed on!

Hill View will be hosting a Vampire Ball on November 6th. If you would like to learn more about the lore that is around the legend of Vampires, join Ron Murphy who will lead a discussion on the subject and tour of the building that evening. Guests will explore the building on an investigation and partake in refreshments and music for our Vampire Ball.  You are encouraged to dress up, prizes will be awarded for best dressed.  And we will have famed psychic Greg Nicholas doing a gallery reading later in the evening.  This promises to be a “Bloody Good Time”!