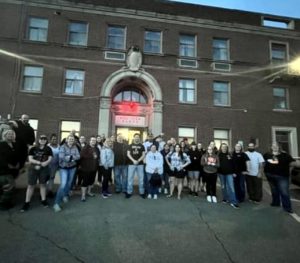 Saturday, April 23 was a magical night at Haunted Hill View Manor. We had the honor of hosting paracelebrity Brian Cano for a special event.

Brian Cano is a noted researcher, investigator, and tech specialist in the paranormal field. He has 20 years of experience in everything from ghosts to Bigfoot. He has appeared on many tv shows including Haunted Collector, Paranormal Caught on Camera, The Unexplained with William Shatner, and many more. 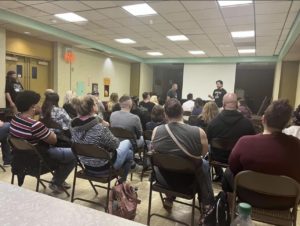 Brian opened the evening at Haunted Hill View Manor with a VIP Meet and Greet. He spoke with our audience about paranormal experiences, perspective, and answered questions from the audience. Brian then spoke about Paralosophy – a term coined by combining Paranormal and Philosophy. At its heart, it suggests that we ask Why instead of How. That paranormal investigators need to think more and do less. It was a fascinating talk and Brian involved the audience with questions and examples. 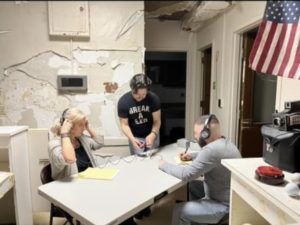 After the tour, Brian joined our guests in different locations within the building and demonstrated various investigative techniques. On the third floor, he had guests participate in the Estes method using soundproof headphones, an SB7 spirit box, and a blindfold.

Moving down to the 2nd floor, Brian and the group experimented with a variety of techniques including the DOS method, using passwords when communicating with the Necrophonic, recording EVPs in 3-minute bursts and listening to them immediately rather than recording all night.

The number one comment we received from multiple guests during the night was how approachable and accessible Brian was to everyone. He had time for everyone, made sure all the groups got to participate and each individual person got to ask questions and contribute. When he wasn’t out in the building with investigators, he was at his table in the lobby where everyone could find him. He sold merchandise, signed autographs, and took pictures all night.

Brian is an amazing person and we were so thrilled to have him at our building. We hope, in the future, he’ll return to Haunted Hill View Manor. Until then, we thank him and everyone who helped make his visit so successful. 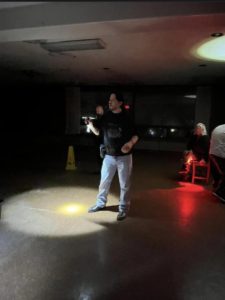